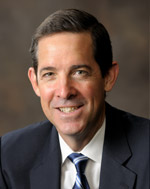 The University of Illinois Foundation has selected Thomas J. Farrell, a fundraising executive who has worked at several top private universities, as its new president and CEO, according to Jane P. Donaldson, Chair of the UIF Board.

Farrell, 50, the former vice president for alumni relations and development at the University of Chicago, will assume the role as UIF’s chief administrator effective January 1, 2013. Farrell succeeds Sidney S. Micek, who will continue to serve as president and CEO through December 2012.

“Tom Farrell brings extensive experience, energy and commitment to higher education to the work of the University of Illinois Foundation,” states Donaldson. “He understands the critical importance of raising the necessary private funds for the University over the next decade to ensure its continued excellence and growth. We all look forward to his arrival and are delighted to have him with us.”

“I am thrilled to be joining the University of Illinois community,” says Farrell. “The University is one of the nation’s great teaching and research institutions—with a highly distinguished faculty; top students from the state, nation and around the world; and three impressive and well-balanced campuses. Having the opportunity to work closely with President Robert Easter, the Foundation Board, the Chancellors, deans, faculty, the Alumni Association, staff and others to find ways to better connect the work of the University with its extraordinary alumni and friends is highly compelling to me.

“I am extremely impressed by the University’s public mission, and how well positioned it is to help our state and country actively, and effectively, address some of our nation’s most pressing challenges. Greater levels of philanthropy and stronger engagement with our community will be key elements in securing our future success. I want to be a part of making that happen.”

In 2010, Farrell was named by the University of Chicago as vice president for alumni relations and development. In that capacity, he was responsible for all alumni relations and development programs, leading a staff of 450. In his two years at Chicago, fundraising jumped by 42 percent in fiscal year 2011 to $305 million and in fiscal year 2012 fundraising totaled $310 million.

Micek, who has led the UI Foundation since 2000, will remain with the organization part time, leading special initiatives.